The court is not a premise for rent by politicians 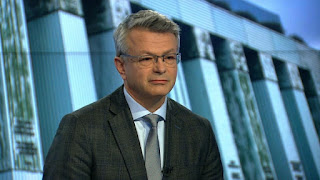 This is Google Translated text of the Supreme Court Judge and the Professor of Jagiellonian University Włodzimierz Wróbel.
The original text is here.

The court is not a premise to rent by politicians. Judge Wróbel's words vibrate like a remorse of those in power...


My name is Włodzimierz Wróbel, I am a judge in the Criminal Chamber of the Supreme Court and at the same time I teach criminal law at the Jagiellonian University. We already know that we operate outside the mode, it also turned out today that this mode will end in nothing, which is why the chairman declared that he would not exercise the constitutional competence of the body in which we were and would not vote on the resolution on the performance (as the chairman said), the President of the Republic of Poland, candidates for the first president of the Supreme Court.

If this was a normal procedure in which such candidates were to be selected, then I would probably shudderly tell you about my vision of the Supreme Court, what should be changed, what should be improved, how should it work and probably would not be here in the room or cameras, nor would anyone be interested in it.

I will make this statement a little different. We think that here are the walls in this room, but this room has no walls. Thanks to the decision that we have media access, we have a transparent process, citizens are watching us. I know that my students are also watching me. During the pandemic, instead of normal lectures, we did talk about law and I know that now my seminarians - Andrzej, Kuba, Monika, Mikołaj - listen to this on Facebook. I invite you now to talk about what is happening here.

We are in the hall where the general assembly of SN judges is taking place. It's a tiny constitutional body. One small constitution provision. He says that this assembly is to present the president with candidates for the post of head of the main court in this country. Of course, there are many such judgments, we can tell each other that everyone has their own powers, but we know the meaning of the Supreme Court. This is a key position. It can change any judgment of a practically different court.

The head of this court also has a huge position, regardless of how he can organize the work of the Supreme Court, let us remember that he is the head of the State Tribunal, the court that judges the authorities.

A tiny constitutional body, one tiny provision that says that this assembly is to present candidates. The creators of the constitution knew why this provision sounds this way.

Because they knew that every power, no matter what color it is, has a huge snatch to court, because the courts are the only independent, impartial institution that has this power to control. It is to defend the citizen against abuse of this power.

And it is known that there has always been and will be tension between political power and the courts, no matter who rules.

Those who wrote this constitution invented such a mechanism of mutual control, check and balance - say the English. Namely, judges cannot call their own bosses, they must present five candidates, and Mr. President cannot, according to the constitution, simply send to the Supreme Court whom he wants, a politician or a lawyer and make him the head of this institution. You have to get along. You have to communicate.

What is the agreement about? And the fact that the assembly is to present, today the law says, five candidates and from them the president is to choose one and appoint as the first president of the Supreme Court. A simple provision, the act repeats.

Why is this so important? Therefore, that the Supreme Court would not become another political prey, especially when there is increasing social and political tension, such a huge temptation exists to win more independent institutions, to free them, to make them dysfunctional.

The first sentence of a prominent politician of the currently ruling party, but it could probably be that of any other politician. He said that in a moment the last bastion will fall, he thought about this event in which we participate, about the general assembly that is to choose the candidates for the first president. Of course, the whole Supreme Court was implicitly implied - this is where the last bastion will fall. But the sentence, which was even more shocking to me, is such a conversation, Mikołaj, remember, you once asked if it is worth being a judge in this country, is there sense? Do you have students, would you like to hear such a sentence from a law student, a young man?

Ladies and gentlemen, what is this gathering for, why are we sitting here, why are we arguing and arguing? That is why we want this bastion to remain as a bastion of justice, and not just become - I don't know - a place to rent by politicians, a caravan where everyone can sit and spend some time. Or in which you can give away elite jobs. That's what this constitutional fuse is for.

The second part of the lecture, the second part of our conversation. A recipe for how such institutions are taken over. This is a very important moment when it is worth talking to lawyers about the legal system, because these independent institutions, such as the court, what is supposed to protect citizens,

that the court was not yours or ours, I go back to that phrase non-stop, only to court was an independent state, no matter what political power in this country is governed.

There will always be tension and there are always ideas on how to appropriate independent institutions. Recipe? You know him very well. What is done first? First, a film is made, judges are turned into beasts, castes, communists, thieves, judges do not have the habit of speaking, they speak with judgments. This situation in which this media attack, a political attack, surprised many. They couldn't say much. Was the justice system functioning well? Sure not. Should that justice just be plowed and say that it doesn't make sense?

Ladies and gentlemen, nothing gives such great satisfaction as the opportunity to unleash authority in the mud. This is a great mechanism. This is the first element.

How is the independent state institution taken over? Procedures are invented, on which politicians mainly influence, political institutions such as the National Court Register are created, which are chosen by politicians themselves, a law is created so that the final decision is always made by a politician and lawyers are often sought, who are often with good will and good will with intention, and often without good will and good intention, they will enter this political plan.

Who will such a president be?
What happens next? We can still see it in this room. We are already beyond any procedure. There is a general assembly, there is a collegiate body, whether someone is being nominated politically who will be the head of this body, after all this is a presidential nomination, you can choose any person. And suddenly it turns out that this constitutional body is not the General Assembly, but the chairman of the proceedings, who decides everything, prejudges everything, says what the law looks like, issues ordinances on how we should discuss whether we will throw into the box or we can verbally ask anyone, we are out of mode.

So what happens next? Ladies and gentlemen, this question is the most difficult to answer. I could not explain to you, what I am saying to my seminarians. After all, it is known that nobody will trust such a court, which will be taken over by politicians. He will not be effective, he will not be able to settle disputes, because he will be our court, but not a joint court.

Who will be the president elected in such a procedure?

I do not know, we are still in a phase that has not ended, but from the chairman's statement to this wall, we are heading to this catastrophe, i.e. such an illegal procedure of presenting candidates to the president. Will the president call? I hope not, but maybe he will. And how will it end? Will I be the president of the Supreme Court whom no one will recognize or only a part will recognize? Will I the president of the Supreme Court, who will change any political change, this one, no one, today, tomorrow, in a month, in two years, in three years, in three years, and then another political power will sweep him out again.

We want the first president of the Supreme Court who, when he wonders where he can go abroad, will see only one neighboring country who will be able to accept him?

I don't know, I can't answer the question, what is all this for? Maybe you will be more implied here I am talking to my students.

And the third topic, what are the meetings for, what is really going on here and who is here? Lawyers are sitting in the room. Judges with many years of experience are sitting in the hall. There are academic lecturers and judges in the room who also have such academic experience. There are now citizens outside this room who the police have IDs for. We will leave this room and you judges will have to sit at the judge's table and look into the eyes of citizens who will wonder regardless of your intentions and regardless of your belief in independence, they will wonder whose court you are. And academic lecturers will have a much more difficult role, Professor, because you will have to stand in front of students and tell what happened here.