„Too big to know” — and yet optimistic

Before I read this book from cover to cover (or rather from first Kindle screen to the last, and listened in parallel, from first seconds to the last of its 8 hours narration by Peter Johnson :-) ) I was a bit afraid it would bear large dose of pessimism. First, I got some such impression from some posts on its author, David Weinberger, blog. The book's very title and some of its chapters' titles „Knowledge Overload” seemed to support my initial feelings.

But despite all that, perhaps mistaken anticipation, „Too big to know” is deeply optimistic. It's closing sentences read:


Weinberger has unusual talent for explaining the difficult concepts and deep thoughts about the cultural and social changes brought about by the growth of the Web in a simple way, easy to understand for everybody. As co-author of „Cluetrain Manifesto” he explained (or maybe even foretold) Web 2.0 revolution; as the author of „Small Pieces Loosely Joined” he expounded the essence of the core of the Web along dimensions like, inter alia: Space, Time,  Matter and Hope. In „Everything is Miscellaneous” he analyses the profound challenge to all classifications and categorizations both in science and in life — created by the digital age.
And now in „Too big to know” he analyses the challenge to the most important building block of our civilisation: the knowledge itself.

First comes the apparent syndrome of knowledge overload. The syndrome is different and more profound from that of „information overload”:

Of course, the Net can scale that large only because it doesn’t have edges within which knowledge has to squeeze. No edges mean no shape. And no shape means that networked knowledge lacks what we have long taken to be essential to the structure of knowledge: a foundation.


Then comes the History of Facts and the transformation of the concept of fact from a gem-like, rare „classic facts” tightly bound to the physical medium of their expression: paper — to the „networked facts” obeying only a law: „On the Net, every fact has an equal and opposite reaction”  (in a wit typical for Weinberger, it is called „a version of Newton's Second Law”).

The first chapters set up the stage and put things in context. In the core of the book David Weinberger explains what constitues today's „Body of knowledge”. We go through concepts of networked expertise (The Expertise of Clouds) and the knowledge diversity and its dangers (with absolutely fantastic explanations of Echo Chambers). Then, we get the fundamental chapter „Long Form, Web Form” that explains the difference between long-form thinking typical of the era of books and the new hyperlinked/networked-form thinking. This chapter is marked by the dialog with two authors whose deep thoughts explored the difference before (Nicolas Carr „The Shalows" and Sven Birkerts „Guttenberg Elegies”) (and who have been particularly important to me ...)

The impact on science and on its main medium: scientific journals, is analysed in „Too Much Science", ending with just glorification of impact of the Web on science (or, better named, „networking science”). Decision making and the profound changes that underline even such rigid structures as that of military or corporate knowledge are covered in „Where the Rubber Hits the Node”.

In the final chapter Weinberger discusses the new emerging infrastructures of knowledge and explains both Semantic Web and Linked Data initiatives (SW/LD). It seems to me that he provided one of the best and the simplest explanation of what these fields are really all about. And he concludes with a note that the web richer in metadata (provided by SW/LD) is in fact „richer in more usable and useful knowledge.”

Where does all this take as to? Paradoxically, we get the answer in the Prologue to the book:

As knowledge becomes networked, the smartest person in the room isn’t the person standing at the front lecturing us, and isn’t the collective wisdom of those in the room. The smartest person in the room is the room itself: the network that joins the people and ideas in the room, and connects to those outside of it.  It’s not that the network is becoming a conscious super-brain. Rather, knowledge is becoming inextricable from—literally unthinkable without—the network that enables it.
(...)
Networked knowledge is less certain but more human. Less settled but more transparent. Less reliable but more inclusive. Less consistent but far richer. It feels more natural because the old ideals of knowledge were never realistic, although it’s taken the networking of our culture to get us to admit this.


So, we get the answer, before we even ask the question! I do not know if  that was Weinberger true (a bit machiavellian I could say :-)) intention — but despite this uncommon approach, the book is even more worth reading and is realy, truly and deeply optimistic.

I could perhaps add a grain of salt to my otherwise enthusiastic review. I do not quite agree with authors opposition to the thoughts from Nicolas Carr „The Shallows”. True, the price we pay for benefit of serendipity on the Web is distraction it also brings. It is a trade-off we must understand. But I do not agree in the underestimation of the mental changes the distraction caused by the Net brings. This aspect of the Web is very problematic and if not addressed by ourselves soon, may in turn reduce our ability to create and absorb the networked knowledge. I do not want to write at length here — it is perhaps worth a separated post...

Waiting for the movie after a little disappointment of the audiobook ... 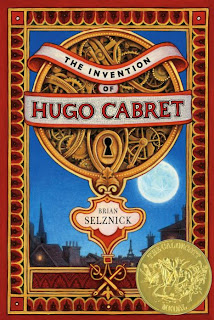 This is about Brian Selznick's novel „The Invention of Hugo Cabret” that gave rise to famous 3D movie by Martin Scorsese. The story of 12 year old boy living in Paris, who cares for Parisian train station clocks after his father's death. The hunger and solitude force the boy to steel food. The boy tries to restore the artificial, mechanical man - The Automaton, discovered by his father in the museum he worked for, and where he later dies from fire. The boy finally succeeds to animate it and the automaton draws sketches that led to discovery of ... Well, I will not spoil it completely ...

I must admit, that the audio rendering in this case was not a good idea for such a book. It seems to have no climax, no conclusion one expects from the first few minutes of listening ...
Now, the physical book had about 300 illustration. And apparently these illustrations are as important as the words themselves.... See it in the book website.

The audio book has a lot of sound effects, but as it often happens these media are not quite convertible ...

So I do not say it was not good — I say that such books are designed to be visual... I also doubt it could be rendered properly as e-book. And that's paradoxically the best outcome from this disappointing experience. Finally we've got a book that saves the value of real, paper, physical books against all these bits...

And I will await the movie to be in cinemas in Europe....