Since "2001: A Space Odyssey" we no longer ignore science-fiction novels and movies, even if we are not in favor of such kind of literature. They usually question our common-sense philosophical paradigms. Of course, only if they have deeper meaning beyond the techno-babble of primitive scifi books. I do not need to recall books like Neuromances, authors like P. K. Dick or movies like Matrix. All of them bore some deeper philosophical questions.

Robert J. Stewart’s “WWW:Wake” inscribes itself into this stream of thought interwoven with scifi fable.

Stewart creates the trilogy about the Web. Wake is the part one of it. It is a trilogy of an intelligent consciousness rising in the web - out of its almost residual activity, related to lost signals and cellular automata-like activity of them.

The first part: WWW:Wake is really a good reading. In fact one almost does not feel any typical scifi climate. We follow the plot of young girl blind from her birth. At some moment in her life, a Japanese professor offers her his help – a promise to restore her sight. An implant is planted into her brain to correct her optic nerve transmission. However, instead of restoring her vision, at first it enables her to see ... the web.In fact, we need here to correct the author - she is able to see the Internet, not the WEB.What is more – the web architecture is not properly described through the visions of the character.This was the first tiny slip of the author – while he made a lot of effort to describe some concepts of the web correctly, at some places we can find many conceptual shortcomings.

However, these issues are minor – the author so brilliantly describes the learning process of the computer program, that is almost like a popular introduction to semantic web ontologies and their “use cases”:

"And and and yes, yes, yes it was staggering, thrilling, long long last, here it was,the key, this website, this increadible website, expressed concepts in a form I could nowunderstand, systematizing it all, relating thousands of things to each other in a coding system,that explained them. Term after term. connection after connection, idea after idea, this websitelaid them out, curious, interesting, an apple is a fruit, fruits contaib seeds, seeds can grom into es..."

The another positive side of the book is its references to important yet less known people and works, like"Cyc" and its author Douglas Lenat, "Mathematica" and Stephen Wolfram or Princeton's WordNet.

Finally – We will look forward to read the second part of the WWW trilogy – I hope it will reveal the true virtues of the author and his opus.

The power of music. II

Two musical "amateurish" events I witnessed recently are worth this post.

In both, I saw them only on the web, but are so powerful, that I could not resisit posting about them...

Until I have time to put them directly here, please visit them via links:

There is something unutterable, yet common in both these "girls",
even though at the first sight - everything is very different.
46 and 11 old - but their voices are so powerful...

The first girl lyrics are:

In a single heart is a whole world contained....

"Into One Grain, there come a hundred harvests
In a single heart is a whole world contained."

This beautiful verse opens one of the chapters of the amazing (hi)story about Sarajevo Haggadah written by Geraldine Brooks. The novel, though fictional, tells the enchanting story of one of the most important manuscripts of Jewish Mediaeval art of book making. The book, valued today at about 700 million US dollars, remains in Sarajevo's National Museum of Bosnia and Herzegovina. 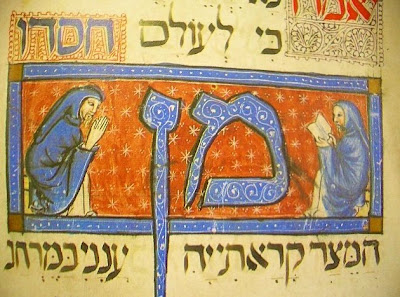 If you want to explore more illustrations from the Haggadah go there. 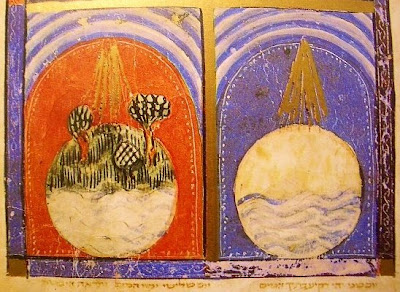 "People of the Book" is a very good reading, particularly in the time of Passover - what was my case in 2009...

The story evolves in fascinating way - it is written in the reverse time order. We go with the narrator back into history, and at any moment we see how the PAST imprints its mark on the PRESENT. And as we go deeper into the past, the more fascinated and mysterious the story becomes.

Beyond the narration, the message behind the book is about tolerance and cohabitations of all three great Abrahamic religions. The oldest story in the book comes from the famous Convivencia period in Spain's history - almost 800 years of relative tolerance between Muslims, Jews and Christians. The book tells also the story of 1492 expulsion of Jews from Spain and their migrations through Europe....

I must, however, admit that there is something in the book that puts some shadow on the authors's intentions or on something I could call her "good taste". I do not want to spoil the book for its future readers, so I will stay mute about it. I must only say, that at some places of the book author went into a kind of storytelling that leaves a taste of distaste to say the least. I hope she (Brooks) did not go there because of the need of XXI century mass readers ....
I will not write what I have in mind, though. If you want to know, ask me. I will tell you in private....

We probably witness the birth of the new Web. At least someone named it. From the dawn of civilization we know that TO NAME is very often equivalent of TO KNOW.

Moses, facing the burning bush, asks G-d about His name, in a conviction that he must pass His name to his fellows, even though they had known Him already. And when the name is uttered, Ehyeh-Asher-Ehyeh — "I Will Be Who I Will Be" — there are no more questions that they have Infinite Power and Infinite Kindness behind them. The very notion of the name — the mystery hidden in it's letters — explained everything.

I try to avoid pompous air in my post — but I do have a feeling we have a birth of the new Web. And the name of it: GIANT-GLOBAL-GRAPH is much more appealing than "Semantic Web". In some sense I'm eager to drop my own-coined term "Web full of Meaning", though I like it very much and despite the fact it had a very cute, allegoric meaning in my mother's tongue: "Sieć pełna znaczeń".

But GGG concept is great because it can simply become this last click on the ratchet in the making of the new machinery of the web of data. Imagine, if we would adopt a habit of naming semantic information on our website as ggg.domain_name.suffix.
at April 12, 2009 No comments:

Tim Berners Lee, the unquestionable inventor of World Wide Web is also a great speaker. His greatness comes from the truth and simplicity of his message. It was such 20 years ago when he invented web, it is also today, when he spends all his days on promoting the shift of Internet to the next level. This time he pushes the idea of "Web full of Meaning" - as I call it. "Semantic Web" as it is known to public, "Web 3.0" called by geeks or - "Web of Data" as recent mantra says. All these ideas are just harbingers of what the web of the future could be.

Now - what we could do today? Strive for data. "Raw Data Now" - the new slogan Tim is chanting in the TED's auditorium. See it. For impatients - forward to minute 10:

Reading "Inhertiance" by David Sanger is incredible experience. I suppose it is one of the best accounts about the global political, economical and security situation ever written. It is motivated by the drastic change in American policies expected with Obama presidency, by the dreadful facts about Iran nuclear program, Pakistan instability, North Korea convulsive attempts to drag world attention to them and their pigmy leader, terrorism and China's military programs.

The part of the book is about Bush and his misjudgments, but ultimately this is the book about the world as it is at the beginning of 2009. It shows how important are threats that we even 3-4 years ago did not even think of - like that of cyber-terrorism, or the real ability to smuggle atomic weapons to any peaceful country....

I'm sure that we mere mortals do not even think or feel how fragile is the world.

Lest we forget it - it will makes our daily steps a bit more careful and thoughtful....

Added a day after: The actuality and accuracy of the book is clearly seen and heard in the recent Obama's Strasburg speach:

He said something that plays well with my title: "At the crossroads where we stand today, this shared history gives us hope - but it must not give us rest" ...

There are no longer human voices, but planets and suns revolving

Mahler's VIII Symphony was written for thousands musicians. "The Symphony of a Thousand" is its second name.

Huge orchestra, with off-stage brass section and three choirs of more than 800 singers, form the setting of one of the most unusual pieces of music that I ever listened to.

See the size of the orchestra on this video:

When performed first in 1910 in Munich, evoked such emotions that it was later called "one of the greatest triumphs in the history of music". But - what makes it even greater - it is far from any kind of pathos or musical hubris so typical to similar acts of Wagner or other composers of late romantic era in the Viennese-German culture of the XIX century.

Mahler selects two, at first glance, totally distant texts. First, Latin, Catholic "Veni Creator Spiritus", and second - the final scene of Goethe's "Faust". Both - deeply spiritual texts form a program for the symphony, that - because of their distance is hard to fully grasp.

Mahler, when talked about the composition process of VIII used to say about "signs from 'out there', a kind of mystical annunciations". And there is something like that.
One of the most moving moment comes at Adagio in II part, exactly when the men chorus starts to sing dark Goethe text ending in "Tame about us - The holy shrine of Love".

And my last word is that Mahler's VIII is not the symphony you listen to once and grasp its gist. It is impossible. Before I watched it, conducted by Leonard Bernstein:

I listened to Antoni Wit performance many times. And still have desire to come back to it - just to discover new emotions, new affections, new spiritual reflections....