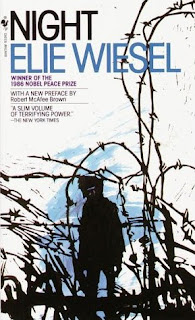 It is a book that, just after I started reading, made me quickly to relinquish it. And I had real difficulty to return ...

Written by famous Elie Wiesel, the Holocaust survivor and Nobel prize winner, „Night” is very realistic account on the tragic fate of Jews during Shoah. But the realism it is written with is almost unbearable.

Don't take me wrong, though. I do not mean I could not read it or that it is bad book. But to apply a typical slogan „Great Book” or „Nice reading” is in fact an act of betraying the author ...

In short, it describes the events since the beginning of the war that happened in Sighet, through the liquidation of Ghetto in that Romanian town. We are taken on a journey to Auschwitz, Buna (Monowice —Auschwitz III) and to Buchenwald. Despite the fact that the fate saved the narrator of the book, he lost his faith in G-d, in humanity and in himself. As more about the book can be found in the good Wikipedia article, I will not elaborate on it more...

In fact, when I finished it I was in a kind of trauma for several hours...

See the ending of it:

„At six a clock that afternoon the first American tank stood at the gate of Buchenwald. Our first act as free men was to through ourselves onto the provisions. That's all we thought about. No thought of revenge or parents, only of bread. And even we were no longer hungry, not one of us thought of revenge.
(...)
One day when I was able to get up I decided to look at myself in the mirror on the opposite wall. I had not seen myself since the Ghetto. From the depths of the mirror, a corpse was contemplating me. The look in his eyes as it gazed at me, has never left me...”

Oh yes, the pile of  books I have read but haven't  reviewed starts to grow.

Quite recently I read John J. Ratey's „Spark” - a very interesting, grounded in science book about the importance of physical exercises for our ... brain.

On this pile (on its bottom) there is still Joseph Conrad „Nostromo”...

I just finished  Jane Austen's first novel „Sense and Sensibility”. And I must say, I'm confused. It is a well written novel, no question. But the level of naivete, of narrowness of the characters' outlook of life — and what is more — of admiration of the gentry-mindedness and heroes idleness — keeps me away from writing a positive, or even any longer review. It also overshadows some passages of true irony and good comedy, that, perhaps give the true value to this book !

I'm not literary critic, so my opinion may not be taken too seriously. And I know, that many bright people (like Leo Strauss) admired Jane Austen's prose. Maybe, I could change my mind after reading some other of Austen's novel. But I still have in mind the another book of the genre and of Victorian age — Wuthering Heights by Emily Brontë. Only 30 years between them, while the difference is of enormous proportions in favour of Bronte....
at January 06, 2011 6 comments: