„The French Lieutenant's Women” — A Story — The Theses 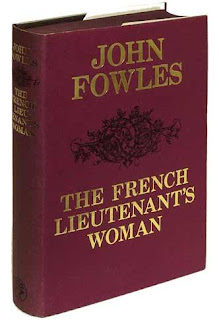 Who did not watch that movie? The top cast with Meryl Streep and Jeremy Irons. The two stories on two planes: The Victorian — set in the XIX century England, apparently close to The Book, and The Modern, telling about the affair of actors who embody the heroes of The Book.

But, the close reading of The Book, uncovers dramatically different thoughts and conclusions and is worth reading  — even more if you already watched the movie.

In this review, I will not relate the plot of the book. If you must read about it, see the respective Wikipedia article. I want rather to direct your attention to some specific aspects of the story and the its deep conclusions.

On the surface, the book tells a story of the unorthodox love between two people living in the Victorian Era and tightly bound by convenances and rules of their age and their society. But under the surface it is a story of universal importance and human choice: Charles, who is already engaged to a woman (with wedding date already known) meets another mysterious and interesting women, and falls in love with her. Something that happens and repeats itself across the time and cultures.

However, Fowles shows, that, as usually is the case, there is no one good happy end. In fact, book shows three possible endings and we can imagine all possible conclusions out of these three different finale. To do so, author distances himself from the plot and tries to describe how the different flows of action depend on human freedom of choice. In showing this, Fowles uses his top literary mastery. These three endings come natural, and have nothing to do with artificial „novel like” implement.

By distancing themselves from the limits of time and space, the author, however discovers that characters of his story live their own lives, and even though all is his imagination — there are constrains, and they are true and unbreakable:

„I do not know. This story I am telling is all imagination. These characters I create never existed outside my own mind. If I have pretended until now to know my characters' minds and innermost thoughts, it is because I am writing in (...) a convention universally accepted at the time of my story: that the novelist stands next to God. He may not know all, yet he tries to pretend that he does.(...) My characters still exist, and in reality no less, or no more, real than the one have just broken. Fiction is woven into all, as a Greek observed some two and a half thousand years ago.  I find this new reality (or unreality) more valid; and I would have share my own sense that I do not fully control these creatures of my mind, any more than you control ...”

Paradoxically, by showing the three possible endings of the story, Fowles does not imply he is a god who creates the world for his stories. Reading it, while we contemplate all of the ends, we still have the notion of the frozen and unchangeable time of the past. On the philosophical or moral level, he shows how our choices create the reality that is permanently fixed — whatever we do....

I also need to relate, that, contrary to the movie, in two of the endings, one of the partners of the affair (in this case — She) does not play the fair card. We witness a women, for whom it is more important to observe her own needs (however lofty) than the true sacrifice of the man she was in love with. The last of the three endings is particularly hard to read after knowing about the vital and sincere choices made the man.
Don't take it as a hidden sexism of Fowles. In life it happens equally (or even) more often, that the man is the one who acts for his own sake. We have no sign the author of the book thinks opposite.

That was a great reading experience, and I particularly suggest it to all who watched the movie — it will elevate your experience.

Mirek
PS. After „The French Lieutenant's Women” I started to read Jane Austen's „Sense & Sensibility”. I already thought there must be some connection between the two authors and their novels. For example, the Lyme Regis pier: „The Cobb”, is the important object in both  „The French Lieutenant's Women” and Austen's „Persuasion” ... Should I find some SIGN in that coincidence ?

I was so moved by O. Henry „The Gift of The Magi” that I translated, to my mother's tongue, that little pearl of literature ....

The two (not quite) Victorian novels

It gives me true fun... Not long time ago I finished reading „The French Lieutenant's Woman” by John Fowles and was truly amazed by its depth (as compared to the movie of the same title), and now I'm in the mid of Jane Austen first novel „Sense and Sensibility”. I may seem naive to be a man of 50 and read such a literature as Austen's novels, but I do have true fun. I look from the different angles on the period in human culture called Victorianism (even though Austen formally lived in the preceding period).

Fowles delivers the contemporary account about Victorianism, and it analyses its dark sides at length, while Austen writes from the depths of the culture, believing in the values his heroes believed...

That's just a short note what I have been reading recently. Both reviews will come soon ...

I was amazed and delighted to read (i.e. listen to) O. Henry's Christmas stories.

I was deeply moved by „The Last Leaf” and by „The gift of the Magi”.

A Tale about Joy and Suffering ... 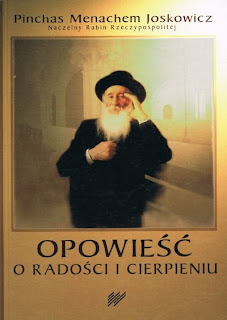 You will not find this book in English. Written in Polish was most surely not yet translated to other languages. It is even hard to find any information about it author, Pinchas Menachem Joskowicz on the net. Some short posts were mostly related to his recent passing away in Jerusalem. The book can be found on Google Books though.

„A tale about Joy and Suffering” (In Polish: Opowieść o Radości i Cierpieniu) is the autobiography of Joskowicz. Born in Hassidic family that belonged to Ger Hasidic Dynasty, he was raised in Zdunska Wola, a medium sized town in Poland. His parents came from Lodz, where I live today ...

What makes this book amazing is the simple language and deep inner warmth it was written with. It is even more amazing when I tell you that it describes the most tragic period of Jewish history in Poland — that of Shoah... In first chapters he describes the world of Polish Jews as it was before the II World War, in all its glory and beauty. "To be a Hassid" is one of the first chapters where we can sense how amazing and splendid was Hassidic life there.

And, suddenly in just few years that world seized to exist. I guess it is the first book I read that reflects how tragic and catastrophic was German attack on Jewish communities in Poland. They were literally wiped out from the surface of earth...

Joskowicz was first sent to Lodz (Litzmannstad) Ghetto and from there, to Auschwitz. He survived only because he was sent, with some small number of prisoners to Germany, first for slave labour, next to Neuengamme camp. After few after-war years in Bergen Belsen, he arrived in 1948 to Israel, where he married and lived with his family. In 1988 returned to Poland after he was called to be Chief Rabbi of Poland, the post he held until 1999. So — he was the first Chief Rabbi of free Poland and he could witness and impact on the revival of Jewish life in Poland. This life however never he even reached a small scale of the life before II World War.
I probably cannot transmit in words of this review the true value of this little book. It is tragic as it describes the end of the world of Polish Jewery. But it also shows, how deep faith and humility can save human being from insanity — which for many was the only reaction to Shoah...
Like the title of it, Tale about Joy and Suffering, it tells about utmost suffering human can endure and about the joy found in life full of faithfulness to G-d...

I have the feeling I could not properly describe the beauty of this little book.
Yet, I read it from cover to cover in just few days, despite being extremely busy ....

The Short Stories of "Goodbye, Columbus" 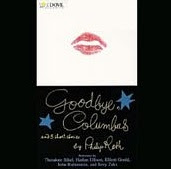 I did not tell in my previous post, that just after „Goodbye Columbus” Philip Roth published five short stories (The Conversion of the Jews, Defender of the Faith, Epstein, You Can't Tell a Man be the Song He Sings, Eli the Fanatic). Many reviewers and some public opinions criticised Roth for iconoclasm apparently emerging from these stories. Many called him "self-hating Jew". As was with „Goodbay Columbus” — I disagree with these opinions. The stories are full of good humour, and yes — of irony, but always told with specific deep tenderness and warmth.

The most beautiful of them is „Eli, the fanatic” who shows the transformation of the secular person to religious one in an incredible way — through ... clothing. Well, it is more complicated and deep than that. It is a tiny story that tells in a simple, unpretentious way, without any grandiloquent words — what it sometimes mean to receive The Call...

The portrait of self destruction - Goodbye Columbus 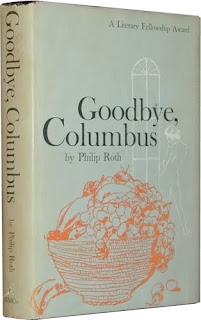 I have just read Philip Roth's first novella „Goodbye, Columbus”. I did that because I liked the two other novells The Dying Animal and Nemesis and I was happy to read them.
I was surprised how deep and thought provoking the author first novel was, and, indeed, it confirms the greatness of the author.
The plot of the novella is simple. The narrator Neil Klugman, a poor 23 years old librarian of Newark Public Library falls in deep and true love with Brenda Patimkin, a daughter of wealthy family and student of very a good school. However, as the narrations unveils, we see that their relation has some intrinsic unuttered problems, probably related to the difference in social status of the partners. They finally break after the discovery made by Brenda's parents of their sexual relations.

But, contrary to many, I do not find this book to explore the "classism" or assimilation problems (both Neil and Brenda were Jewish).

To me it is a record of self destruction — or the destruction of true love, of true great values in life by the narrator. The amazing value of the book lies in the ability of author to stay behind the hero, to create such a narration where, on a surface, while we read, we support his acts and his decisions. And only after a short musing we can notice this deception. We clearly see that there is no excuse for the hero, that he, almost deliberately, kills the love of his life — having not a single spark of remorse, and even trying to excuse himself.

Was it unconscious ? Was is really deliberate ?

As with all destructive steps of our lives — the main reasons are inside us ....