Reading "Mysteries of the Kabbalah" 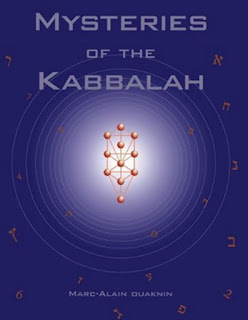 I have been reading Marc-Alain Ouaknin (the most famous for his account on Talmud: The Burnt Book) "Mysteries of the Kabbalah" for quite a long time, both in Polish and English...
I was coming to and going away from it for other books.

I must say that this is one of the most important and most beautiful and most comprehensive (for us mere mortals of XX/XXI centuries...) book about the Kabbalah...

This is not a review yet. This is a running log of some finest thoughts and ideas.

Let me start with, actually, some quotes the author makes:

"... the mystery of evil, the only one in which God does not make us believe but makes us think" (Marie Noel)

"For man, good resides in the gap between the perfection of God and the transgression of this perfection through the creation of the world. This creation is a break in the immanence of perfection. Any creation is less perfect than the source of all perfection."

I will perhaps come here to some previous thoughts of the book later ...

There we go now: from Rabbi Nachman from Breslov: "It is forbidden to be old" .

CREATION OF THE UNIVERSE

"... in the beginning, after the contraction of the divine, the tsimtsum, and the first emanation of light, there was beriya. This word literally means 'creation', the transition from absolute nothingness to a state of being, the transition from ayin to yesh, to produce the raw material of the universe ..."

"This raw material, the infinitesimal element in matter, had a specific shape, the point.(...) So, in the beginning, there was the point ..."

"The second phase of creation for the kabbalists is called yetsira: "formation". (...) the first transfiguration of the point was a vertical line, (...) After this vertical line a horizontal line was born and attached to it, and thus the plane was born."

THE IMPERFECTION AND EVIL

"(...) the Kabbalah of Rabbi Isaac Luria was an immediate success, since it answered the existential questions of the period."

Rabbi Issac Luria replied by formulating the theory of tsimtsum ("reduction"). According to this theory, the first act of the Creator was not to reveal himself to something on the outside. (...) the first stage was a folding in, a withdrawal; God withdrew 'from himself into himself' and in doing so left a void within his bosom, thus creating a space for the world to come."

"That which happens in the world can only be the expression of this original and essential exile (one might be tempted to call it 'ontological'). That the divine presence, the shekhina, might be ontologically in exile is a daring and revolutionary idea. All the imperfections of the world can be explained by such an exile"

I must admit, that this theory developed by Rabbi Isaac Luria is the first ever explanation of the imperfection of the world and its horrible condition, its evil - given from inside a religious tradition - that speaks to me... That was a revelation to me to find it out after so many years of study ...

Rabbi Nachman from Breslov: "Words are like birds; why keep them shut away in cages?"

"Joy is the creation of space in which speech can be expressed and exist."

Rabbi Nachman from Breslov: "It is a great obligation to always be in joy" , "Sadness is the exile of divine presence"

Jean-Yves Leloup: "Being is not a thing, but a Space, an Opening which must remain free. God is the freedom of man."

"The letter of the Ten Commandments were produced 'in a void', as one might say 'in marble' or 'in wood'. The actual substance of the writing is a nonsubstance"

THE MEANING OF WORDS

Rabbi Levi Isaac of Berditchev: "Everyone has a duty to look at their nothingness and to respect it"

"Saying that 'father' and 'mother', each in their own way, possess the twenty-two letters of the Hebrew alphabet is expressing the fundamental relationship between language and fertility; it is stressing the fact that 'making' a child is first and foremost a dialogue and that the human being anchors the possibility of his existence in the linguistic potential unleashed in speech"

THAT IS ENOUGH ! DO NOT COME

"To summarize the theory of tsimtsum, the space occupied by the world is created aby an emptying or withdrawing of the infinite and by a force that maintains the light of the infinite at the periphery. This force is called Shaddai"

"It is also the name of God, which designates the force that prohibits the infinite from reoccupying the void it has left."

A quote from Maurice Blanchot: "... at the beginning of everything, the power of words and exegesis is affirmed, in which everything begins from a text and everything comes back to it, a single book in which a prodigious sequence of books unfolds, a library that is not only universal but which takes the place of the universe and which is even more vast and more enigmatic than the universe."

THE REVELATION OF A TEXT

"The Revelation is first and foremost the revelation of a text; this is the revolution contained in the Bible story"

"The question of the relationship to the text is not merely that of reading but of interpretation. Interpreting is discovering meaning but not truth - not revealing a secret, but revealing that secret exists."

"The "Text-God" must be accorder its status of infinity; in other words, every means must be used to give it an infinite meaning. These means consist of all the rules of interpretation that have been explained in the previous chapters, and especially gematria, tseruf, and so on. The need to interpret the text as the liberation of the divine is one of the fundamental meanings of all the work of kabbalists and Talmudists."

"Truth does not mean the appropriateness in relation to certain prior existing meanings, but resides in being "open to" ...

"The infinity of God is self-limiting. He created the world and became its guest in a finite form. For the Kabbalah, this passage from the infinite to the finite occurs through the text"

"For kabbalists, the incarnation is produced in the body of the Text"

"The name is a meditation on nothingness that becomes a being, and which returns to nothingness. It is entry into movement and an infinity of time"

"(...) it is the conjugal, or rather love, relationship that is the favorite metaphor, as the Bible shows in the Song of Songs. Love, (...) is the primary value on which the world rests. This reunion of the beloved and the bethrothed is a refrain that runs through kabbalistic literature and is translated at the cosmic level by the reunion of man with the Creator (...)"

Rabbi Tarfon taught, "You are not required to complete the work, but nor are you at liberty to abondon it" (Pirke Avot 2,16)

Baal Ha-Orot, The Master of the Lights:
"If you want to, you can. Son of man, look!
Contemplate the light of the Presence that resides in all existence!
(...)
You have the wings of wind,
the noble wings of the eagle...
Do not deny them for fear that they will deny you.
Seek them and immediately they will find you."

End of reading of "My journey to Lhasa"

I have finished this great book.

Let me share only one reflection that comes to its reader's mind: it is deeply tragic what has happened to amazing Tibetan culture since Chinese invasion and during their occupation of Tibet. On the eyes of the entire world, China has killed the smaller world of the culture so deep and beautiful.

How many times in the history of the world, large and powerful countries were destroying the peoples and their culture on the eyes of powerless world ...