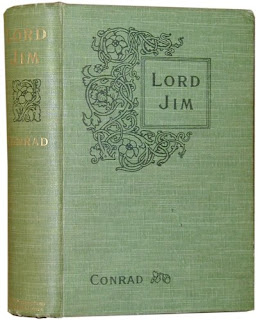 Joseph Conrad's Lord Jim is such an icon of classical English literature that it makes no sense for reviewer to relate to the book's plot - almost all of us know it well.

What I wanted to stress now, is the book's expression of unexpressible power of human conscience. To me, the entire plot of Lord Jim is the description of doomed struggle to forget about the cardinal sin of the hero life. The sin that is almost illusive, almost pardoned by circumstances - yet persistent...


Conrad teaches us, that very often, when we make horrible things, unpardonable acts, unforgivable steps - things, that resist any simple classification of evil deeds, we are not punished in a literal sense of the word. But that's only the surface.

Under scrutiny, it was revealed that Lord Jim did not make any obvious crime or offence, when, together with the crew, he abandoned the ship (Patna) being sure it is sinking. But it did not sink, and Jim's life, to its very end, became marked with the guilt of negligence and abandonment...

What Conrad says is the simple truth: sometimes one may do something bad, yet still internally and socially tolerable, but the thing one will always regret, and - this way or another, will always pay for the sin of doing it - in all moments of his life. Even if the only punishment is the fiery fire of our own conscience ....

And sometimes, only at the moment of death after so much pain and struggle, it seems, our sins are forgiven ...:

"And that's the end. He passes away under a cloud, inscrutable at heart, forgotten, unforgiven, and excessively romantic. Not in the wildest days of his boyish visions could he have seen the alluring shape of such an extraordinary success! For it may very well be that in the short moment of his last proud and unflinching glance, he had beheld the face of that opportunity which, like an Eastern bride, had come veiled to his side."

When it comes to the book's narration - I must say I'm deeply by the incredible method Conrad applies. He treats the plot of the book as almost already known to the readers or as real as the facts of life, and slowly, in a kind of nonchalant narration, he uncovers its details and flow of events. This is also what makes the reading of Conrad difficult and deeply engaging.

And, last but not least, the language itself. See this:

The line dividing his meditation from a surreptitious doze on his feet was thinner than a thread in a spider's web.

Honestly - I can not comprehend, how, knowing English as his third language (after Polish - his mother tongue and French - lingua Franca of his times), he could get to such mastery of the expression, expression where the language and its poetry plays irremovable role:


"Such were the days, still, hot, heavy, disappearing one by one into the past, as if falling into an abyss for ever open in the wake of the ship; and the ship, lonely under a wisp of smoke, held on her steadfast way black and smouldering in a luminous immensity, as if scorched by a flame flicked at her from a heaven without pity.
The nights descended on her like a benediction."

"A brooding gloom lay over this vast and monotonous landscape; the light fell on it as if into an abyss. The land devoured the sunshine; only far off, along the coast, the empty ocean, smooth and polished within the faint haze, seemed to rise up to the sky in a wall of steel."

The last note. It is almost inexplicable to me, how would it happen that I found the same person, Christopher Marlowe in two books in row I read. The first was Christoper the real - Shakespeare largest competitor to literary greatness - in Bill Bryson book. The second, Captain Marlow, the mythical narrator of so many of Conrad's books...
at February 28, 2010 No comments: 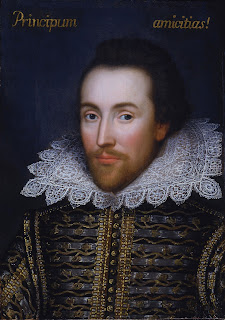 To me, as to many, this book came as a surprise. Bill Bryson, famous for his travel ("Neither here Nor There") and popular science ("A Short History of Nearly Everything") books, wrote a book that is completely different from his other books. "Shakespeare. The Illustrated Edition" is an untypical biography of William Shakespeare. Bryson tries to find, in Shakespeare life, the reason why "For somebody who has been dead for nearly four hundred years, he remains awfully active". The book starts with the modern, 2006 discovery of so called Cobbe portrait, which according to most of scholars IS the authentic Shakespeare portrait (notwithstanding numerous and notable oppositions to that claim).

"Shakespeare may be the English language's presiding genius, but that isn't to say he was without flaws". A certain messy exuberance marked much of what he did. Sometimes it is just not possible to know quite what he meant"

Such claims are of course seriously substantiated by specific parts of his plays. He also compares young Shakespeare to prematurely passing Christophere Marlowe, showing that when Shakespeare was still writing trifles, Marlow already wrote ambitious and appreciable dramas.

When the biographer comes to years of the first decade of XVII century, i.e. to the times of publication of sonnets, he shocks the readers with:

"The extraordinary fact is that Shakespeare, creator of the tenderest and most moving scenes of heterosexual affection in play after play, become with the sonnets English literature history's sublimest gay poet"

Yet in the concluding parts of the book, Bryson rejects firmly all these "conspiracy theories" according to which, Shakespeare did not exist, and what we have under his name, is in fact from the quills of Francis Bacon, Edward de Vere or others.

"Only one man had the circumstances and gifts to give us such incomparable works, and William Shakespeare of Stratford was unquestionably that man - whoever he was"

Few words need to be said about the book physical form. "Illustrated Edition" is full of XVI/XVII century drawings and portraits and scripts facsimiles, that help in perception of Shakespeare lifework and the framework of history and culture he lived on.

Great book - something that is yet another proof of physical books superiority....

(A riddle: who wrote these strophes ?)

Swan Thieves - When a word is the paintbrush and a book is the easel ... 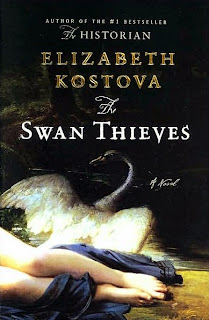 Elizabeth Kostova's second famous book (after Historian) is about obsession and time...
Well, it is also about art and love and about many more matters.
However in my review I want to focus on the two former themes of the book.
It is very recent book (release date was January 12, 2010) .

The plot describes a famous fictional artist Robert Olivier. After an violent attempt to slash a painting in National Gallery of Art he has been hospitalized. His psychiatrist, himself a painter becomes deeply involved in Olivier case. As the patient refuses to speak, his therapist goes deep into his life, visits and talks to his former wife and gets into relation with his former girlfriend. Soon he discovers that his patient is obsessed by beautiful women, Beatrice, late XIX century impressionist painter. When the psychiatrist discovers the truth about her and about her troubled life, and in some sense explains the roots of his `patient's obsession - that finally brings relieve to Robert Olivier and he seems to be healed.

The true theme of the book is the power of obsession that, in some circumstances, can completely overwhelm human's life. Obsession, that transcends the time and space.
Robert Olivier falls in love with the person who is no longer alive. His expression of the love is the painting. He paints the women who lived in XIX century France, and for some reason did not became famous, even thought she full deserved it. I would like to find the better word than obsession, as it has some pejorative connotations. Maybe just Passion?

When we look deeper into ourselves we quite often find such passions, although maybe of different magnitude or kind. In this context, she was worth the love lasting more than century...

Olivier, in his sketches and paintings, brings her back to life. Her beauty is almost surreal or maybe even hyper-real. When he discovers more and more about her past, he reveals the secrets that still exist, secrets frozen in her letters, in her uncovered paintings. The past time is no longer past, the events, the emotions and deeds find realistic existence in Olivier's passion... It seems to me that Kostova believes, as I do, in the specific concept of time, I once described after reading Vonnegut's "Slaughter House 5".

There is small disappointment at the very end of the novel. It is in authors description of unnaturaly fast Robert's healing and recovery. It is unconvincing and quite flat and I must say that to some extent, the climax of this otherwise beautiful and enchanting book, is lost...
at February 02, 2010 4 comments:

During the regular day of week I can't have enough time to write a full review - it will wait till the weekend.

But - I could not resist telling you that this is another great novel worth reading !!!
Kostova is another fantastic story teller...
at February 01, 2010 No comments: