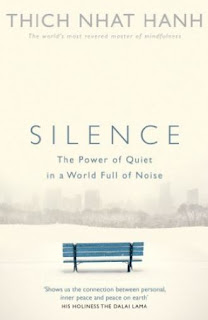 I'm an admirer and a follower (at least intentionally :-)) of the famous Vietnamese Buddhist mont Thich Nhat Hanh. I have read a number of his amazing books. However, I started reading them in the time I stopped blogging, this is why you did not see any review of his books here.

I hope to have some time soon to review the best of them. Now this post is just a signal that my current morning reading (replacing for a short while when I was in hospital, the book about S. Ulam) is now:

Thich Nhat Hanh - SILENCE. The Power of Quiet in a World Full of Noise.


As all books written by him, this one is very simple, modest and bright explanation why we do need silence. Sounds trivial? Perhaps... But when you start reading Thich's words, you will never think it is trivial or naïve ...

"(...) You don't need a lot of modern gadgets in order to be civilized. You need only a small bell, a quiet space, and your mindful in-breath and out-breath. (...) That is what I call true civilization."

"People usually think that their ancestors have died, but that's not correct. Because we are here, alive, our ancestors continue to be alive in us. (...) They are fully present in every cell of our body. (...) We are a community of cells, and all our ancestors are within us. We can hear their voices; we just need to listen."


I will be coming back to this post again...

"Hope is the power behind love. When hope fails, so does love" - The Ladder of Divine Ascent

This was quite unexpected discovery and the following  addition of this masterpiece to my library. I was pointed to it by a friend, when we discussed our recent reads of the spiritual and meditative texts from different traditions. After my recent readings from Buddhist, Chinese and Jewish traditions, this was a very profound "return" to some of my roots that are also very important to me. My grandma was Christian Orthodox. My uncle and aunt contributed greatly to the rebuilding of the orthodox church in the city of Bransk (amazing town in eastern Poland known from Eva's Hoffman "Shtetl"). The link here, leads to text in Polish where they are named. Whenever I listen to an Orthodox polyphony I know this Eastern tradition (along with the Western Christian and Jewish) is not in my mind - but in my bones...

My search into meditation and spirituality started decades ago in the Western Christian tradition (among others it was for my friend and a monk Jan Bereza). Before, still in college times I was reading (not understanding too much though :-), John's of the Cross "Dark Night of the Soul". So with deep reverence I just started to read:

John Climacus was 7th century, early Christianity Saint reveread by almost all Christian traditions. He was a monk at Vatos monstery at Mount Sinai. He is said to leave decades in a noble isolation, at the foothill of The Mount Sinai. What attracted me to the book and turn me into its (slow) reading (it will perhaps take a year or more in my style of reading of such books) is the opinion of my friend. She said that the book is not very much "religious". That it is universal and is all about the elevation of one's personality and the path through life ...

However, during the reading I also found some thoughts and directions I would like to stay far from ... You can perhaps find some grains of salt in my comments below...

What is below is the selection of the finest quotes from the book I made over almost one year of reading it. I've been typing them here, so this post was evolving since December 2016. Today, while on business in the US, I have just finished reading it....


❧
A quote from the Intro:

"Stillness (besychia) is worshipping God unceasingly and waiting on Him. Let the remembrance of Jesus be present with your every breath. Then indeed you will appreciate the value of stillness"

"Prayer is the expulsion of thoughts" (ascribed to Evagrius)

(re) starting my reading of this book...

Finally, after some long time (4 months) I'm returning to this book... I finished lengthy intro by bishop Kallistos (which was very good I must say) and started the Ladder itself. And here, I must say a strange surprise... in the third step ("On Exile") I found these words:
"If you long for God, you drive out your love for family." and then quite lengthy explanation why ... which is really strange... And the warning that if you "(...) let the tears of parents or friends fill you with pity (...) you find yourself weeping forever in the afterlife"

This strange. I do want to comment on that yet, will continue reading and thinking ...

"War against us is proof that we are making the war"

"All he would say was this: 'Please forgive me. No one who has acquired the remembrance of death will ever be able to sin". (...)

Do not search about for the words to show people you love them. Instead ask God to show them your love without you having to talk about it.(...)

Do not deceive yourself, foolish worker, into thinking that one time can make up for another. The day is not long enough to allow you to repay in full its debt to the Lord.

"The first step toward freedom from anger is to keep the lips silent when the heart is stirred; the next, to keep thoughts silent, when the soul is upset; the last, to be totally calm when unclean winds are blowing.

Anger is an indication of concealed hatred, of grievance nursed"

"And this is how anger replies: «I come from many sources and I have more than one father. My mothers are Vainglory, Avarice, Greed. And Lust too. My father is named Conceit. My daughters have the names Remembrance of Wrongs, Hate, Hostility, and Self-justification»"

"Malice is an exponent of Scripture which twists the words of the Spirit to suit itself."

"Talkativeness is the throne of vainglory on which it loves to preen itself and show off.
Talkativeness is a sign of ignorance, a doorway to slander, a leader of jesting, a servant of lies, the ruin of compunction, a summoner of despondency, a messenger of sleep, a dissipation of recollection, the end of vigilance, the cooling of zeal, the darkening of prayer."

"It is hard to keep water in without a dike. But it is harder still to hold in one's tongue."

"Hypocrisy is the mother of lying and frequently its cause. Some would argue that hypocrisy is nothing other than a meditation on falsehood, that it is the inventor of falsehood laced with lies"

Today, I was reading "Step 15" - "On Chastity" and I must say that this is the part of the whole Christian teaching where I start to be its critic, where I start to think that it made a great harm to us. Read this:

"To be chaste is to put on the nature of an incorporeal being. Chastity is a supernatural denial of what one is by nature so that a mortal and corruptible body is competing in a truly marvelous way with incorporeal spirits. A chaste man is someone who has driven out bodily love by means of divine love, who has used heavenly fire to quench the fires of the flesh" (...) "The rule and limit of absolute chastity is to have the same feelings regarding animate and inanimate beings, rational and irrational" (...) "Truly blessed is the man totally unstirred by anybody, any color or any beauty."

Why I'm so enraged by such words? See, we are all on this earth because of love, the physical love that follows the spiritual love. The love finds the best friend in our bodies. The sexual feelings, sitting on the opposite side of chastity are sacred. That is what Bible has taught us through "Song of Songs". That is what is the very essence of our own personal experiences when we truly loved - in both spiritual, higher sense and in "bodily desires" to be with the person we loved, to know her (him). I think that the whole "school of thought" that tries to say that the corporal feelings, the sexual desires, and the physical love are bad - is just sick and harmful. Sure, there is a space between the "sacred and holy" sex and the debauchery and laxity. But to teach good is not to deny the desires, is to show from where they come: from God !!! Why Christianity has not done it well???

❧
"When you hear that your neighbor or your friend has denounced you behind your back or indeed in your presence, show him love and try to compliment him. (...)  It is not self-critical who reveals his humility (for does not everyone have somehow to put up with himself?). Rather it is the man who continues to love the person who has criticized him." - The great passage from 'On vainglory' chapter - the 22nd step of the ladder...


" (...) it is sheer lunacy to imagine that one has deserved the gifts of God. You may be proud only of the achievements you had before the time of your birth."

"The light of dawn comes before the sun, and meekness is the precursor of all humility."
"Meekness is a mind consistent amid honor or dishonor. Meekness prays quitely and sincerely for a neighbor however troublesome he may be"
"The souls of meek shall be filled with wisdom, but the engry mind will cohabit with darkness and ignorance".

"Evil is deliberate kind of knowledge. Or, rather, it is a deformity of the devil.(...)
Hypocrisy is soul and body in a state of opposition to each other, intertwined with every kind of invention."

"On Meekness, Simplicity, Guilelessness and wickedness" - the 24nd step of the ladder...


"Humility is constant forgetfulness of one's achievements. (..) It is to forestall one's neighbor at a contentious moment and to be first to end a quarrel. (...) It is the disposition of a contrite soul and the abdication of one's own will."

"The man who has come to know himself with the full awareness of his soul has sown in good ground. However, anyone who has not sown in this way cannot expect humility to flower within him."


"On Humility" - the 25th step of the ladder...
❧
Not very often in this, otherwise great book, you can find words that puts you off... This is sad remainder that Christian tradition has some darker sides... See this:

This is strange and something I hardly understand or find acceptable...

"This is why a wise man once said: 'You shall obtain a sense of what is divine'"
"On Discernment" - the 26th step of the ladder...

Here a comment from myself: The Bible, through the "Song over Songs" gave us the sense of what is divine... Why Christianity seems to forget that teaching .... ?

"Let us seek to discover the things of heaven through the sweat of our efforts, rather than by mere talk, for at the hour of death it is deeds, not words, that must be displayed."

"Keeping guard over one's thoughts is one thing: watching over one's mind another. Distant from each other as the east from the west, the latter is more significant and more laborious than the former."

" 'God is love' (1 John 4:16). But someone eager to define this is blindly striving to measure the sand in the ocean."
"Hope is the power behind love. Hope is what causes us to look forward to the reward of love. Hope is an abundance of hidden treasure. (...) When hope fails, so does love."