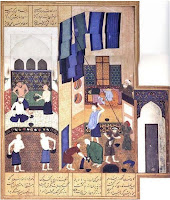 I start this review of the acclaimed Orhan’s Pamuk novel „My name is Red” in a specific climate. As I indicated in my harbinger of this review, when I was reading the novel, I could not put away all my recollections and feelings related to Umberto Eco’s “The Name of the Rose”.  So just after I finished great Pamuk’s  novel  and even before writing this review, I switched my MP3 player to equally  famous Umberto Eco’s book. That gives me another opportunity to ponder over the cultural differences between the European culture I was born to, and the Eastern, now by-gone culture of Ottoman Empire, that has some reflection in today’s Turkish culture, and with more general outlook — in Islamic culture.
However, before exploring the analogy deeper (what I probably postpone to another post) I will try to tell something about „My name is Red” itself.
The novel takes place in Istambul at the end of XVI century.  It introduces its readers into a world of miniaturists and painters devoted to book illustrations. At the outset, this is extremely interesting – as we well know, painting in Islam is quite restricted – even a depiction of any human form is a kind of idolatry and is forbidden.  This is why Islamic cultures developed more in directions of calligraphy, illumination of manuscripts, miniature painting, painting on ceramics and extremely flowery rugs and carpets creation.

The novel’s  intriguing plot throws us into the world of late Ottoman empire, under the rule of Sultan Murat III, who  purportedly, ordered an extended and rich set of illustrations, apparently borrowing from Venitian style of painting, to the book (Thousands Years of Hagira) which was to be offered to some European envoys as an expression of Ottoman or, more precisely — his own, pride. However, amid strong opposition from fundamentalists of the era, he did that in secrecy and commissioned the task to a specific workshop of talented miniaturists and illuminators. Partially because of another wave of pride and competition among them, partially because of the restrained love affairs and desires of the young people, and most importantly because of the influence of fundamentalists – the mysterious murders start to shadow the peaceful work of the illuminators.  And this face of the book — the numerous plots, almost criminal-like tension and great dramatizing is extremely well designed and rendered in words.  Let me however not reveal anything from these plots because I do not want to spoil the readers’ future impressions.  Anyway, let me only say shortly that the mystery about the identity of the main murderer is not revealed almost to the end of the novel. Yet when the conundrum is finally solved, it is of a very specific climate of surprise. Contrary to our today’s literary experiences it is almost non-surprising, we could probably conclude the truth well in the mid of reading – yet – just because of the fantastic way Pamuk intertwines the plot – it becomes a true crescendo of the book.

There is also a beautiful love story. The love from the first sight, yet almost tragic and almost unfulfilled, it finally finds fulfillment in a way perhaps different than its actors expectations, and a bit different to our expectations as readers. And that makes it even more beautiful. As its frequent references to the story of „Hüsrev and Shirin”  by Persian poet Nizami …

Beyond all these features, the book has also many philosophical connotations. We are exposed to specific way Muslims in Ottoman Empire pondered about God and human soul, the afterlife, the reward and punishment. I wanted to stress a thought that, to me, was probably the most important. It is a consideration about books and painting. First and foremost, it shows the incredible role of writing, books and libraries in the development of Islamic culture. But it also shows, that just after armies, their soldiers and all the military power, the books were assumed to have equal power. Pamuk recalls an attack on a city where, after the massacre of its inhabitants, the books were the next victims ...
We are exposed to the numerous deep thoughts that decorate the action packed pages, like:

„Painting is the silence of thought and a music of sight”

„Books, which we mistake for consolation, only add depth to our sorrow.”

„What was venerated as style was nothing more than an imperfection or flaw that revealed the guilty hand.”

„Where there is a true art and genuine virtuosity the artist can paint an incomparable masterpiece without leaving even a trace of his identity.”

The ideas about painting („… the farthest one can go in illustrating; it is seeing what appears out of Allah’s own blackness”) are also thought provoking.  And the parts of the narration were we discover that the true essence of painting can be discovered only by blind painter.  That parts of the book were very deep – and one could not avoid an analogy to Beethoven who was almost deaf when composed some of his masterpieces.  And the mystical self-blinding of some of the book heroes in  the critical events of the plot…
Pamuk explores the European influence on Islamic art, the opposition and admiration of it. In fact the attempt to apply European style of painting into Islamic illustrations becomes one of the key controversies among the characters of the novel. Rich parallels shed some light on wider context of the cultural connections between East and West,  their evolution in the Middle Ages and the tolerant approach of religious Muslims of the age  („Unto Allah belong the East and the West”)
I guess it is worth mentioning how beautiful and unusual writing instruments are used by Pamuk.  For example there is a chapter were the narrator is a tree or a horse or a coin… And the chapters with have such unusual narrators, play an important role in this amazing book…
Finally, if you let yourself to live with this amazing book for a considerable amount of time, you start to feel the climate of the time it describes… And when you compare that feeling to the feeling we Europeans experience while reading  „The Name of the Rose” or  “The Book of Abraham” (Marek Helter) on the another – we lose our pride and typical conviction of the superiority of our culture over the ancient cultures of Judaism or Islam…
„My Name is Red” is a monumental book, the book that will stay with you long after you flopped the last page of it, or, as was in my case, when you switched your AudioBook off for a long time after it…

Out of my admiration to Benjamin Britten's music I travelled to Aldeburgh - a little costal English town on the North Sea shore...

Here is the sculpture sitting on the stony beach there: 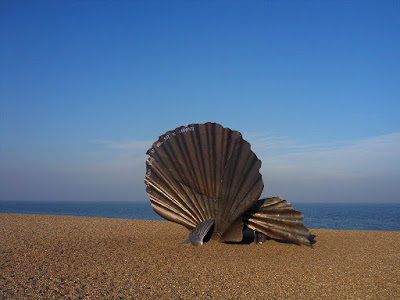 And all the day I had Britten's music in my ears...

„The Name of the Rose” by Umberto Eco

When I noticed the parallels between  „The Name of the Rose” by Umberto Eco and Orhan's Pamuk „My name is Red” I spent several hours with the former. It was my second encounter to the book (first in my mother tongue many years ago). However, fo a moment I will restrain myself from writing about it. First I feel un urge to publish first my review of „My Name is Red”, second, the version of „The Name of the Rose” I listened to was abridged version, and I do not want to review it from it. Already have the unabridged and it waits ...

Meanwhile, having my fascination of Umberto Eco prose returning to me, I read „Foucault Pendulum” again... The review will come one day :-)

My Name Is Red — The Mysteries of Books, Illustrations, Islam and Love ...

This short note is not a review yet.
Contrary to my hopes, I could not find time to catch up with the growing pile of unreviewed book....
Maybe soon...

But I cannot withhold myself from telling you how fantastic is Orhan Pamuk's "My Name Is Red" novel.
It touches so many important matters — the Islamic philosophy and religion, importance of books and paintings, reaction to European influence upon Ottoman culture....

Deeply immersed in Islamic tradition, it reminds me about "The Name of the Rose" by Umberto Eco... As the later was related to the importance of books to medival Christian/European culture, so the former was to Islamic culture of Ottoman Emipre...

I only hope I will find time soon to tell you more about it....