.„... but we still carry its genes” — reflections on David's Bezmozgis „The Free World" 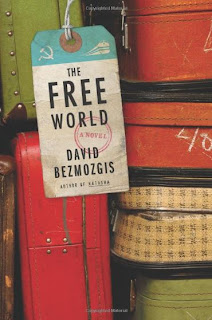 I had quite special and unique impressions when I was reading „The Free World. A Novel” by David Bezmozgis. Born 1973 in Riga, Latvia Bezmozgis came to Canada as a child. Well educated in both Canadian and American universities, Bezmozgis debuted in 2004 with his „Natasha and Other Stories”. He is now well known filmmaker and writer. As it was for his debut, his new novel (published this year, 2011) „The Free World” reflects the experiences of Jewish refugees from former Soviet Union. The action of „The Free World” is set mostly in 1978 Rome with some episodes in Vienna and frequent comebacks to then soviet Latvia. Three generations of Krasnansky family of Latvian Jews, who escaped from USSR come through the painful process of getting accustomed to the free world. They look at this new world with their eyes which not long ago looked at the world through communist lenses. And to me this transformation, this change is the essence of the book. They are in the free world, but, to various degree they still „carry communist genes”.
On the other plane the book is very nostalgic and sad. There is a notion and a feeling of specific „uprootedness” the characters experience in Italy. A lot of thoughts about the feeling of Jewish refugees to the state of Israel, so often painted by remnants of soviet propaganda residing in their heads... Their specific reactions (Jews on one side of their souls and former soviets on the other...)  to swift change of Popes (this was the year of Paul VI, John Paul I and John Paul II)

Reading (i.e. listening to incredible voice of Stefan Rudnicki) the book I had that specific feeling of listening to debutant, although that does not make it worse than any other books I recently read...

BTW, here is 8 minutes long recording of Bezmozgis reading from the novel...

After „11/22/63” (the review below) I read very interesting book by Clark Shirky „Here Comes Everybody: the Power of Organizing Without Organizations” (review pending). 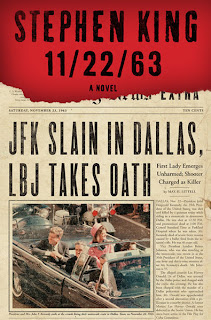 Stephen King’s writing has always been above the level of popular literature — whatever he used to write about. His horror books were not interesting because of the frightening horror scenes and plots — they were interesting because of the author mastery of storytelling. I could imagine King writing anything, even stupidest tales, yet I’m sure, it would be worth reading.

Travels in time, alternate histories — such themes were no seldom in novels. So, in some sense, the main theme of 11/22/63 is not very original. Yet King converts the seemingly banal sci-fi theme into a vehicle that he uses to portrait America of nineteen sixties with incredible meticulousness and color (we could even say — with a smell). He also uses it to tell us about his philosophy of time, of past, present and future…

In a synopsis to the novel I could only tell (not to spoil the pleasure of reading it) about its main hero, high school teacher of English from Maine who, with the help of seriously ill local diner owner, finds in this diner a time slip that enables him to travel in time to nineteen sixties. He finds many reasons to go there and “to correct” the flow of events that would later lead to some tragic facts. However, the diner owner’s mission, which he could not accomplish, was to revert the history of America by saving J.F. Kennedy, killed on November 22nd, 1963…

Let’s leave it for now whether the mission was successful or not. The paradox is that with King’s imagination comes deep thinking about history and its essence.

“The past is obdurate and it does not want to be changed”.


Would we have better world if Kennedy was not killed in Dallas?

Traditional views and our hero say — yes, but are such views justified? King takes us on a journey, where we start with strong conviction of the veracity of such conviction, but where we later end with deep doubts. Yet King's conjectures are not politically motivated, instead he sheds light on the nature of causality itself, on the incredibly connected world where „butterfly effect” of individual human freedom of choice is profound. Its effect is so strong that for many, the world existing in time appears like the pre-ordained rigid and obdurate structure, but when one dares to trust his own sense of freedom — he finds that he could indeed change the course of events. Would it be for good or for bad — that’s another question which usualy remains unanswered… (The novel seems to claim - for bad)

King's mastery allows the mere mortals to ponder on these deep philosophical conundrums without any kind of abstract and unrealistic “philosophizing”.
How often we, in our lives try to rewrite our past? It is hard to find a person who passed his life without thinking (or sometimes even doing) „it would have been better if I did so and so”… Many tried, usually to no avail. In almost all known cases, we come to that simple fact of the persistent obduracy of the past…

It is not a first time when the great literature of our age contemplates time. Kurt Vonnegut in his Slaughterhouse No. 5 makes his hero “unstuck in time”. For Vonnegut events in time are fixed and frozen:

A Tralfamadorian test pilot presses a starter button, and the whole Universe disappears.' So it goes. "If You know this," said Billy, 'isn't there some way you can prevent it?
Can't you keep the pilot from pressing the button?' 'He has always pressed it, and he always will. We always let him and we always will let him. The moment is structured that way.


For King, the time is open ended and our will can create parallel universes. They harmonize and we perceive all them as one single and consistent universe:

The multiple choices and possibilities of daily life are the music we dance to. They are like strings on a guitar, Strum them and you create a pleasing sound. A harmonic. But then start adding strings. Ten strings, a hundred strings, a thousand, a million. Because they multiply! (…) Sing high C in a voice that’s laud enough and true enough and you can scatter fine crystal. Play the right harmonic notes through your stereo loud enough and you can shatter window glass. It follows (to me, at least) that if you put enough strings on time’s instrument, you can shatter reality.


Here we come to the essence of the novel. The travel in time and Kennedy case are used to teach us the fundamental lesson about the higher harmony that exists in time and in events of history.

It is so easy to shatter the delicate harmony of the world. We must walk and live carefully.

“Every breath we take is a wave”…


The novel ends beautifully. You can read these words, they will not impair your future reading:


„She speaks in a voice almost too low to be heard over the music, but I hear her — I always did. „Who are you George?” „Someone you knew in another life, honey.” Then the music takes us, the music rolls away the years, and we dance.

It was one of the best novels I ever read... 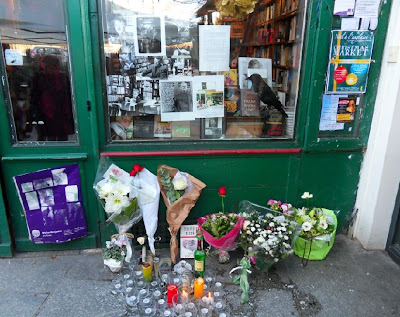 It actually happened almost when I arrived this time to Paris... So it was also a sign to me - I am unquestionable lover and patron and frequenter of this little yet incredible Parisian bookstore...

I only pity that I can't stay here for George's funeral (Thursday, Père Lachaise) - yet I kindly invite all my French friends to pay tribute to this unusual person...

The bookstore will stay as it was, led by his daughter, but it is hard not to notice that certain era in Paris' cultural life ended.... 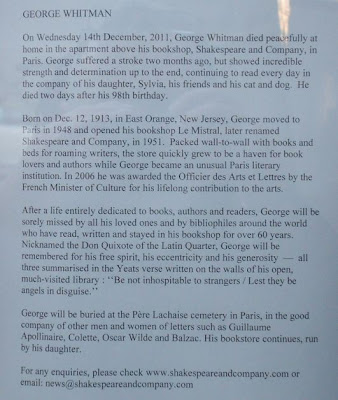 Semantic Web is NOT for machines to understand !!!

Quite shocking title - isn't it?

First — a word of explanation: I used to write here reviews of books that I read. But I'm also a businessman and, still, a scientist... Recently mostly computer scientists doing my mostly private research in Computer Sciences.

And on my trip to nearby Warsaw, for our conference for investors and media, I woke up in a hotel and suddenly an idea came to my mind that shakes the common understanding or interpretation of what Semantic Web is about. This was quite troublesome at that morning, as my conference had the title „Semantic Web for business”.

Traditionally, people in the field speak about „Machine Understanding” (like in the Wikipedia Semantic Web definition: „The Semantic Web, as originally envisioned, is a system that enables machines to "understand" ....). When machines are about to "understand" we come close to all these AI tales and predictions about machine intelligence and machine consciousness ...

It suddenly came to me, that, we, who care about Semantic Web, make a great harm to this fantastic field just by purporting that it will enable machines to understand.

Semantic Web does not enable MACHINES to understand — it enables US, HUMANS to cope with vast sea of information (and the ground of data) and, in turn, TO UNDERSTAND the meaning of the data on the Web (and soon — everywhere). It does so by providing tools and techniques and specific frames and paradigms that enable PEOPLE to extract and UNDERSTAND, the MEANING of the information on the Web.

I know that this is nothing more but an interpretation and only a bit different point of view. I know, that when Tim Berners Lee spoke about "understanding" he used it in somehow metaphorical way. But I also know that many people today started to use this "understanding" in more literal sense, and that makes a big confusion in human minds, causing harm to this fantastic area of Computer Science...

So I will start making difference. Semantic Web is not for machines to understand, is for us to comprehend the meaning of the vast sea of information that form today's Web.