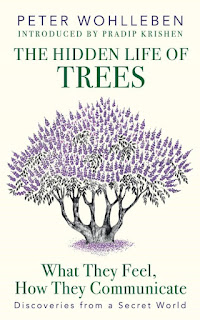 I did not expect this book will change so much in my attitude to nature... "The Hidden Life of Trees: What They Feel, How They Communicate—Discoveries from A Secret World" by Peter Wohlleben. (See GoodReads entry) Passionate, scientific, non-fictional - don't know how to label it :-), yet it really changed the way I thought about nature.

There was perhaps something inside me when I was sick seeing a tree cut without a reason or the large parts of forests in North Poland "cultivated" as the lumber industry calls it. Don't take me wrong, I'm not in the camp of people who protest the lumber industry. Not at all. But I saw so many examples of a very bad way the forests were managed... We heard the stories of officials (here in Poland) trying to kill the last pristine forest we have: Puszcza Białowieska...

The book will tell you more about that. I read it audio. Great voice of Mike Grady.

This seems to be my real return to blogging about books. Even short notes are better than nothing.
However, the post like the three earlier, are from my early morning reading of mostly physical books, so they are a bit different in character and the way I write ... 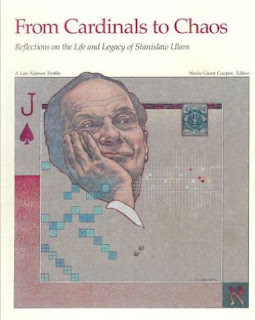 I was able to buy a true rarity (through SealsThings via Amazon): the antiquarian volume of "From Cardinals to Chaos. Reflections on the Life and Legacy of Stanislaw Ulam" edited by Necia Grant Cooper and published in 1989 by Cambridge University Press.

While not a very old print, it is generally hard to get.

For long time I was in admiration to Stan Ulam. That dates to my Master Thesis in which I used Monte Carlo simulations, pioneered by Stan. The book gives me a possibility to know about him much more.

Stanislaw Ulam was Polish-American scientist. Educated as mathematician in the pre-war Poland, he worked on Manhattan project and invented many techniques for computer simulations and contributed greatly to both pure and applied mathematics.

In time, this post will perhaps tell you more about him ...

BTW, one, perhaps funny reason I like Stan is for ... his first name! My beloved grandfather was also bearing proud Stanislaw name and my mother is Stanislawa :-)

The book starts with amazing account on Stan by his wife Francoise Ulam. She outlived Stan by 27 years and helped to compose this amazing edition....

"He was a loner, a maverick, a very complicated man, a Pole, and, above all, a study in contrasts and contradictions, which often aroused mixed and conflicting emotions in people. He moved only to the beat of his own drum and never kow-towed to anyone or stopped to promote himself."

"Contrary to those people who were violently against the bomb on political, moral or sociological grounds, I never had any question about doing purely theoretical work... I felt that one should not initiate projects leading to possibly horrible ends. But once such possibilities exist, is it not better to examine whether or not they are real? An even greater conceit is to assume that if you yourself won't work on it, it can't be done at all. (...) Sooner or later the Russians or others would investigate and build them."

"Of all escapes from reality, mathematic is the most successful ever. It is a fantasy that becomes all the more addictive because it works back to improve the same reality we are trying to evade. All other escapes - love, drugs, hobbies, whatever - are ephemeral by comparison."
(The Lost Cafe, Gian-Carlo Rota)

" ... I always had confidence that if Stan had a feeling for something, it was sure to be significant."Francis H. Harlow

This paradox reveals that computing a probability using standard definition can deliver much different results for a simple system that obviously should just result in one! Namely, depending on a way we define the set of ALL possibilities, we get 1/4, 1/3 or 1/2 as the probability. Read about it here, a nice demonstration done using Wolfram's Mathematica is here.

Stan was truly "a renaissance man". In addition to the vast areas of mathematics and physics he covered in his studies he made multiple forays into biology and what we could call today cognitive sciences. In "A Gamow Memorial Lecture" he delivered at the University of Colorado Boulder on October 5, 1982 he made many interesting conjectures about some important mental mechanisms. For example, he speculated about the visual perception, or to be more precise the pattern recognition. The fundamental question is how we recognise handwritten letters, while they differ so dramatically in the two texts written by any two people?
Does the brain store many variants of the letters or some abstract pattern?
Stan conjectures about the third possibility: real-time deformation creation and fast comparison between what we see and what we have in memory: 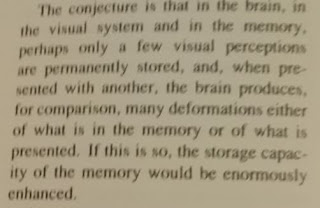 However, he was fully aware of the speculative character of such conjectures, and when trying to explain why we can not expect that computations would lead to model the brain, he points (as I and many other do) to Gödel theorem: 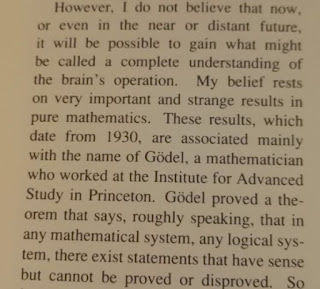 I have bought an antiquarian marvel. The 1974 collection of Stanislaw Ulam selected papers: "Sets, Numbers, and Universes" published by MIT Press: 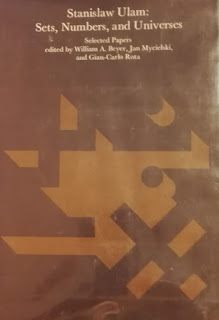 In this book I found amazing sketch of Stan made by famous Polish painter Zygmunt Menkes: 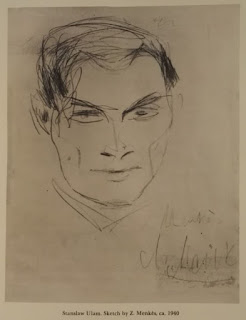 Can't wait till have time to read Stan's papers !

The concept of Cellular Automata was discovered by Stan Ulam and David Newman in 1940s while they both worked at Los Alamos National Laboratory. In the book I review here there is an amazing article (by Brosl Hasslacher) on the applications of Ulam and Newman ideas for fluid dynamics. It shows how the model offered by the cellular automata can lead to Navier-Stokes equations for fluids and their dynamics!

The key tool in DNA sequence analysis that has been central to genetic science is the ability to measure a distance between DNA sequences. It is not very well remembered but this is one of the greatest of Stan's achievements. In 1972 he proposed how to define a usable metric space of the DNA sequences ("Some ideas and prospects in biomathematics", Annual Review of Biophysics and Bioengineering 1:277-291). The definition enabled sequence comparison and it was one of the most important intellectual achievements of seventies that later led to modern genetics and finally to the Human Genome Project. Stan, speaking of the sequence analysis, with the typical proud wit, once said: "I started all this" :-) (After Walter B. Goad article in the book).

To my great amusement I read in Nick's Metropolis account that it was him & Stan who coined the name for one of the most important name in Statistical Physics: MONTE CARLO:

"It was at that time that I suggested an obvious name for the statistical method - a suggestion not unrelated to the fact that Stan had an uncle who would borrow money from relatives because he "just had to go to Monte Carlo"
:-)

BTW, my Masters' thesis was written on a base of my Monte Carlo simulations. I must admit that at that time (30+ years ago), I did not know much about Stan. For some reason he was missing on the author's list of the key paper on that topic: http://bayes.wustl.edu/Manual/EquationOfState.pdf  which was read by, us (by then physicists) while missing the real key (and also earlier) work: http://homepages.rpi.edu/~angel/MULTISCALE/metropolis_Ulam_1949.pdf read usually by statisticians and mathematicians: 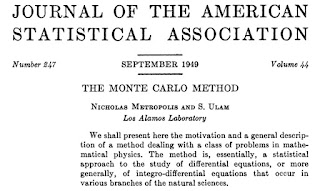 What is not widely known about Stan's Ulam contributions to science is his contribution to the science of nonlinear processes. Together with Enrico Fermi and John Pasta he created a model system named as "FPU problem" for the authors names.  BTW, we call it today "FPUT Problem", thanks to T. Dauxios ("Fermi, Pasta, Ulam, and a mysterious lady". Physics Today 6, 2008). Earlier, in 1953, they initiated a series of computer simulations exploring how simple, multi-degree nonlinear mechanical systems obeying reversible deterministic dynamics evolve in time.

However, what was great about Ulam's contribution to the field of research was ... his wit in naming it. He once remarked on its naming (non-linear science) saying that it is like "defining the bulk of zoology by calling it the study of 'non-elephant animals'" :-) Using this funny expression he simply stressed that both in mathematics and nature the nonlinear processes prevail!
More telling, in this context, is the another Stan's bon mot:

"FPU was a watershed problem: marked birth of nonlinear science (and computational physics/ ”experimental mathematics”) with its paradigms of  chaos, solitons, and patterns, and produced many specific insights into physical phenomena including ILMs, anomalous heat transport, and a deeper understanding of statistical mechanics. The FPU problem was, as Fermi remarked, quite a “little discovery.”

All that goes even deeper. In the next article of the book ("The Ergodic Hypothesis"), Adrian Patrascioiu considers how the solution of the FPUT (Fermi, Pasta, Ulam and Tsingou) problem can be linked to Quantum Mechanics:


"So perhaps quantum mechanics is nothing more than classical statistical mechanics done the right way in a universe filled with particles interacting primarily via electromagnetic and gravitational forces."

I must say that Ulam had an incredibly deep understanding of Quantum Mechanics. In his discussions with Gian-Carlo Rota (Italian mathematician and philosopher) he once said:

The notion of the variables of higher type, particularly in the probability context, where we speak about probability AMPLITUDES instead of themselves, is indeed very important and, for many, the hardest to grasp...

Stanislaw Ulam had many friends. Let me name only two great minds I was not very much aware before reading this book. The first is Paul Erdős, genial Hungarian mathematician (https://en.wikipedia.org/wiki/Paul_Erd%C5%91s). Ulam and Erdős exchanged about 200 letters on science... It is a demonic paradox that Paul died in Warsaw in 1996 at the mathematical congress. In the country of Ulam's childhood...

The notes left in Ulam files, discovered after he passed away, revealed a deep level of friendship, respect, good humor and focus on deep problems of science...

What was specially pleasent to me was the discovery that so many of these dialogs happened in ... Gainesville Florida - my adopted "home town" in the US....

Both Françoise and her husband are buried with her French family in Montparnasse Cemetery in Paris.

The post finished on June 25th in Lodz, Poland