Some time ago I finished reading Churchill's multiple volume account on II World War. As I wrote before, Churchill narration is excellent and if you want to know the history of one of the most tragic periods of human history — his books are invaluable.

I do not support those who claim that Churchill was not „objective” in his relation of the war time. First, as we well know, there is no such thing as objectivity. History is played by people and is written by people. Their worldview and events they participated in always shape it. Second, I was amazed how honest Churchill was in his account. Of course, he toots his own horn, but he does not avoid writing about the sins and errors of his own nation and his own! It was the author himself, who wrote about his work: „This is not history, this is my case.” Well, I have many objections to the books, but I will write about them at the very end of this review.

In „Alone” (which, in the first edition, was called „Their Finest Hour”) Churchill writes about the Fall of France and about the two crucial battles of the II World War — the air battle of Britain and the sea battle of the Atlantic. Unfortunately for French people, his relation of French attitude to the war and to Hitler is shameful. He reveals the lack of any preparation to the war on French part, their lack of coordination and flat collaboration of many of French influential circles with Nazis. One of the most interesting parts of this volume
is about Dunkirk and the amazing evacuation of about 300 thousands soldiers (including about 120 thousands French) to Britain. Having in mind the power of  Hitler at that time of the war (May 1940) that was indeed a miracle. The narration about the Battle of Britain and RAF bravery is fantastic. It is here were we can read, firsthand, about emotions and gratitude that led Churchill to the famous saying:

„Never in the field of human conflict was so much owed by so many to so few”.

We then move to the North Africa and Middle East, just to discover how important the region was during the war, and how big was Britain effort not to allow Hitler to grow too much there. Here comes the part about Field Marshal Archibald Wavell, the great British soldier. This account is special — because Wavell was in fact dismissed by Churchill after unsuccessful operation „Battleaxe”. Churchill writes about Wavell in high esteem. The book ends with the vivid arration about the treacherous behaviour of Soviet Russia in the war — until the later time, when they were attacked by Hitler, what was called „The Soviet Nemesis”. Reading this part, I was amazed how shallow is human memory... Today, Russia's role is remembered as the part of the great alliance that conquered Hitler. And that is fine and true. However, we tend to forget (with great aid of
Soviet, and later and even today, Russian propaganda) that it was for Stalin’s policy that Hitler could gain so much in the beginning of the War. Were they not attacked, they would stay on Hitler's side... It is amazing that we don't see Russian's afterthoughts about that shameful part of their history ...

„Grand Alliance” is an epic tale about the turn in the fate of war and the formation of the alliance between Britain, United States, and now on the attacked side, Soviet Russia. It is extremely detailed and fine written part.  Sometimes I lost sense that it is historical account, because it reads like a novel.

„Triumph and Tragedy” describes the finale of the war and the German defeat. However, as the title goes, the joy of victory was spoiled by the tragedy of divided Europe, that was the result and, as Churchill suggests, the price of the war. As in many parts of the entire set, here we also get sincere admission to allies own blunders. Churchill seems to be an outspoken narrator of both the glory and the sin...

For example, when he writes about Poland and the tragic fate of Warsaw and the treacherous behaviour of Stalin and his puppet communist government (Lublin committee) it becomes clear that Allies simply indulged to Stalin’s whims and demands. BTW, I'm not entirely sure if Churchill did not try to exonerate himself from these sins in some way or another, but no one can deny he is honest in his narration...

However, there is deeply disturbing issue about the book, well, about all the books of the set. It is a complete silence about Holocaust... As we now know, Shoah, the mass murder of almost 6 million Jews during the war and about 5 to 11 million other ethnic or social groups was one of the major efforts of Germans, both logistically, politically and militarily. It is startling that Churchill does not write anything about it. I do not suspect him of anti-Semitism, though one of only two mentions about Jews in the entire set is a petty joke ..., but this ignorance is hard to understand.

There is no doubt that both Churchill and Roosevelt new about the systematic extermination well. Jan Karski, Polish underground fighter, informed western powers about that. There are evidences that both most important Polish Government in Exile figures, like Mr. Mikołajczyk had frequent talks with Anthony Eden, Churchill's right hand. So why such omission? Maybe it explains Churchill handling of the case of Jewish refugees coming to then being-born state of Israel?

I do not know, but this ignorance casts a deep shadow on Churchill's account, despite the paradoxical greatness of the books and the well deserved Nobel price in literature he won...

This review was written in Paris, between 25 and 29 of May, 2011 with lots of  thoughts about France, Europe and the bad past they came through ... 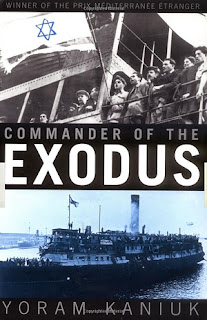 „Commander of the Exodus” by Yoram Kaniuk, Jewish writer and journalist is a book that shows the darker and much less known side of the immigration to Palestine of the Holocaust survivors.

It is a story of  brave Palestine-native hero — Yossi Harel, who in the course of 1947-48 brought about 20000 Shoah survivors to Palestine. There would probably be nothing strange in the story if it was not for British Navy and, more generally, British Mandate authorities to actively oppose the coming of the survivors to their land....

Kaniuk, who demonstrates the unusual talent of combining true historical account with a great story telling talent, does not seem to be anvengeful or even biased against British. He just coldly relates the episode of the complicated history o the birth of the state of Israel. This relation is, nevertheless, quite disturbing and embarrassing for the British — who verbally declared support to the Zion Cause, but did very little to help the nascent State to start its life in peace. The ships coming to Palestine from Europe were harassed and often turn back, not without fighting, to Europe. In the most dramatic stories, some Holocaust survivors were sent back to Europe and deported to the former Nazi camps!

Even calling these events „ironic” seems to be outrageous.
I have found the article that tells the true account of these events. The following picture of „Exodus 1947” ship comes from it: 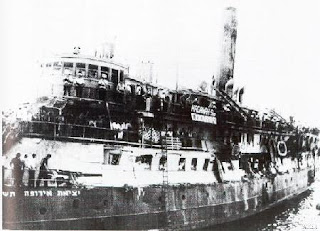 „Commander of the Exodus” does not even try to explain why the events had such a turn there and at that time. The book focuses on the valour of its main hero and the brave people who believed they come to their dreamed off homeland — but were met by hostility of those in whose hands the fate of millions was endowed...

I must admit that I write this review long time after I read the book. And I write it now, because the another great book — that by Winston Churchil („The Second World War”) — sheds some light on the matters, and I will be reviewing it shortly. I will try to give my own theory in that forthcoming review....
at May 14, 2011 No comments: