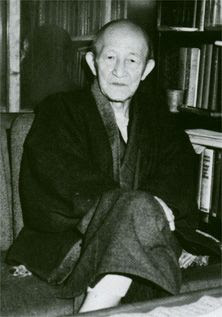 Confronted with the thought of Keiji Nishitani, I could not write anything from myself. So I decided to put here some remarkable quotes from his book "Religion and Nothingness", which contrary to the title is not about religion as we used to understand it, rather it is about our universe and being...


« Since olden times, the cognitive power of reason has been called a "natural light." But the real "natural light" is not the light of reason. It is rather, if I may so designate it, the light of each and every thing. What we call the knowing of non-knowing is, as it were, the gathering together and concentration on a single point of the light of all things. Or better still, it is a reverting to the point where things themselves are all gathered into one. All of this goes contrary to our ordinary way of thinking, and, as such, must sound strange. . »

« To say that a thing is not itself means that, while continuing to be itself, it is in the home-ground of everything else. Figuratively speaking, its roots reach across into the ground of all other things and helps to hold them up and keep them standing. »

« To imply that when a thing is on its own home-ground, it must at the same time be on the home-ground of all other things sounds absurd; but in fact it constitutes the "essence" of the existence of things.The being of things in themselves is essentially circuminsessional. This is what we mean by speaking of beings as "being that is in unison with emptiness," and "being on the field of emptiness." For this circuminsessional system is only possible on the field of emptiness of or sunyata. As I have already noted, if the field of sunyata be excluded, for a thing to be on its own home-ground and to be "itself" would be for it not to be in the home-ground of all other things; and, conversely, for it to be on the home-ground of other things would be for it not to be itself. In that case, there would in truth be no way for us to explain the fact that all things "are" in the "world." Only on the field of sunyata, where being is seen as being-sive-nothingness, nothingness-sive-being, is it possible for each to be itself with every other, and so, too, for each not to be itself with every other. »

« Now the circuminsessional system itself, whereby each thing in its being enters into the home-ground of every other thing, is not itself and yet precisely as such (namely, as located on the field of sunyata) never ceases to be itself, is nothing other than the force that links all things together into one. It is the very force that makes the world and lets it be a world. The field of sunyata is a field oj force. The force of the world makes itself manifest in the force of each and every thing in the world. »

« Even the very tiniest thing, to the extent that it "is," displays in its act of being the whole web of circuminsessional interpenetration that links all things together. In its being, we might say, the world "worlds." »


« For us, this field of emptiness is something we are aware of as an absolute near side. It opens up more to the near side than we, in our ordinary consciousness, take our own self to be. It opens up, so to speak, still closer to us than what we ordinarily think of as ourselves . In other words, by turning from what we ordinarily call "self" to the field of sunyata, we become truly ourselves.»

«All consciousness as such is empty at its very roots: it can only become manifest on the field of emptiness. Consciousness is originally emptiness.»

« The self is not a small, self-centered circle. Together with emptiness it is free of all outer limits . It is, so to speak, something with no circumference whatsoever. This is elemental self-awareness. As a being in unison with emptiness, then, the self is one absolute center, and, to that extent, all things are in the home-ground of the self.»

« We do not simply live in time: we live time. From one moment in time to the next we are making time to be time, we are bringing time to the "fullness of time." That is the sense of what we referred to earlier as "being bottomlessly in time." »

«The identity of "being" and "knowing" is more primal than traditional metaphysics has taken it to be. »

Let me repeat it in an another way: OUR SELF (...) RESISTS ALL EXPLANATION BECAUSE IT IS A BEING IN UNISON WITH EMPTINESS.

« The finitude of human existence is essentially an infinite finitude. »

« In brief, the statement that the finite is finite, while quite valid in terms of conceptual thinking, is in error from an existential standpoint. It misses the essence of finitude, and because it is prehended from a standpoint that does not face up to existential finitude existentially, it fails truly to reveal finitude. »

«When we persist in our pursuit of what is truly true, among the things that are true, the truly true appears in the mode of paradox or absurdity, under conditions ordinarily considered as altogether contradictory to truth. Where ratio is pushed to its true extreme, the "irrational" shows up. Where meaning is pushed to its extreme, "meaninglessness" shows up. And yet what thus appears as paradox, irrationality, or meaninglessness, is truly absolute reality . It is the living vitality of "life" itself. To say here that life as such is meaningless is to say that life is truly living itself »

« It is the point that Meister Eckhart calls Leben obne Warum ("life without a reason why"). It is the same with the claim that paradox is the "truth" and that irrationality is the ratio. »

« It is life in which one whiles away one's time, accepting whatever may come. »

« It is the Existenz of the self that lives in the world-as-time from the very beginning where time comes to the fullness of time and where the world worlds. Existenz in this sense does not differ from its essential time.»

« At this point intolerance inevitably raises its head. Like the consciousness of being a chosen people that appeared in the religion of Israel, we have here another case of the self-centeredness on a religious dimension which T oynbee was speaking of. »

« Intolerance here is essentially bound up with the fact that faith comes into being here on a personal standpoint: the standpoint of a personal relationship with a personal God. This is so because, in the last analysis , in religion the personal contains some sort of self-centeredness . Consequently, the faith of Christianity could not help setting off antagonisms from time to time between this self-centeredness and the other element of agape, namely, the love of neighbor. »

« The battles for the conquest of heathendom that we see toward the end of the ancient period , throughout the Middle Ages (as in the Crusades, for instance) and the modern era, the persecution of heresy, the Inquisition, the religious wars within the Christian world-all of these and the intolerance displayed, along with the similar phenomena found in Islam, are all but absent in the history of Buddhism. »

« In terms of its genesis, this view of history came about in resistance to the Christian faith and its intolerance. This view of history is based on trust in human reason. This emphasis on reason got its start amidst the bloody struggles within the Christian world, as the will to find a common standpoint apart from dogmatic faith. Hence, this rational standpoint was, in principle, born of a spirit of tolerance. This led, on the one hand, to the efforts of deism to reinterpret the Christian doctrines from a viewpoint of reasonableness. »

« It is in the nature of time and our very existence, so to speak, that from the start both are saddled with an inexhaustible debt. It is in the nature of our existence that we are unable to sustain ourselves except through being engaged without intermission in doing something. Or put the other way around, our life is such that we must work without pause to pay back the debt that lies heavy upon our shoulders . »

« The finite aspect of our life displays its essence as an infinite finitude. (It is here, as noted before, that the original sense of the mythical notion of transmigration is to be seen.) Our existence and time appear to us here as burdens.»

« The term "karma" expresses an awareness of existence that sees being and time as infinite burdens for us and, at the same time, an awareness of the essence of time itself. »

« Time is at all times on the verge of vanishing, and all things show the frailty of being that keeps them ever poised on the brink of collapse. Time and being display a constant pull to nullification from beneath their very ground. That is Impermanence.»

« Here time and nothingness as the nullification of all things signify the freedom and effortless flight of a bird gliding across the sky without a moment's hitch, unburdened. Like the bird that leaves no tracks along the path of its flight, impermanence here means the non-hindrance of being free of the encumbrances of one's past and of restrictions stemming from former lives.»

More to come on "Religion and Nothingness"...