Darkness of the Soul in the Heart of Darkness 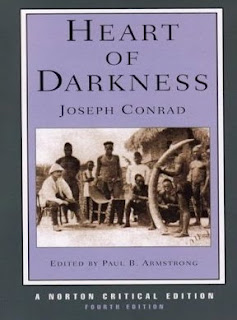 I must admit that the second reading of "Heart of Darkness" by Joseph Conrad was extraordinary experience. As it was with "Lord Jim" it is hard to write a review about the book that deserved and rightly received tens of thousands of reviews.

So let me point only these matters, that were so important to me.

"Heart of Darkness" to me is about the nature, the human condition and the dark side of our souls. It is also one of best written short novels I ever read, using intense, suspended language - with many symbolic connotations and special constructions related to its form of "frame narrative". For all language lovers - those who like the pure construction of phrases - this book is like good poetry.

The dusk came gliding into it long before the sun had set. The current ran smooth and swift, but a dumb immobility sat on the banks. The living trees, lashed together by the creepers and every living bush of the undergrowth, might have been changed into stone, even to the slenderest twig, to the lightest leaf. It was not sleep--it seemed unnatural, like a state of trance. Not the faintest sound of any kind could be heard. You looked on amazed, and began to suspect yourself of being deaf--then the night came suddenly, and struck you blind as well.

The pervasive nature is contrasted with human affairs and our constant jabbering:

The smell of mud, of primeval mud, by Jove! was in my nostrils, the high stillness of primeval forest was before my eyes; there were shiny patches on the back creek. The moon had spread over everything a thin layer of silver--over the rank grass, over the mud, upon the wall of matted vegetation standing higher than the wall of a temple, over the great river I could see through a somber gap glittering, gittering, as it flowed broadly by without a murmur. All this was great, expectant, mute, while the man jabbered about himself.

or in this fragment:

The pilgrims could be seen in knots gesticulating, discussing. Several had still their staves in their hands. I verily believe they took these sticks to bed with them. Beyond the fence the forest stood up spectrally in the moonlight, and through the dim stir, through the faint sounds of that lamentable courtyard, the silence of the land went home to one's very heart,--its mystery, its greatness, the amazing reality of its concealed life.

The tragic human nature is projected onto the nature, but Conrad does not make it dull and naive. He does not meditate on humans thrown on the nature. Rather he is able to show the authentic tragedies, deceptions and deep unshaken love:


'Yes, I know,' I said with something like despair in my heart, but bowing my head before the faith that was in her, before that great and saving illusion that shone with an unearthly glow in the darkness, in the triumphant darkness from which I could not have defended her--from which I could not even defend myself.

Finally, the book shows how easy is to lost our own inborn sagacity, how easy is to deprave oneself. What we usually need - is just a bit too much power, too much wealth and too much domination over others...

I tried to break the spell--the heavy, mute spell of the wilderness--that seemed to draw him to its pitiless breast by the awakening of forgotten and brutal instincts, by the memory of gratified and monstrous passions. This alone, I was convinced, had driven him out to the edge of the forest, to the bush, towards the gleam of fires, the throb of drums, the drone of weird incantations; this alone had beguiled his unlawful soul beyond the bounds of permitted aspirations.

I know that there are many more interpretations of this incredible book, some even accusing Conrad of racism. Nothing is more far from the truth and from the author intentions. His portrait of the relations between whites and blacks in the book are in fact, accusations of imperial era. As it is in the most famous movie adaptation of the book: "The Apocalypse Now" ....