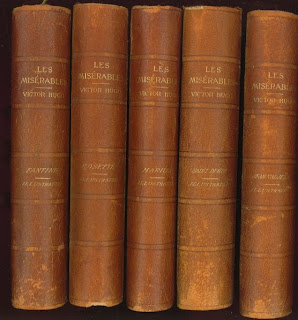 I'm slowly coming back to my regular writing of reviews for the books I read and/or listen to.
Don't ask me please what has caused this, almost 2 months long, silence. There were reasons, but I wanted to keep them away from digital world, as all the thoughts and feelings caused by them ...
So my first very late review is for Victor's Hugo „Les Miserables” which reading I shortly reported here.
After „Notre-Dame de Paris” (here and there) I knew that Les Miserables will be THE book of my 2010 reading. And it was. It seems that writing any new review for the masterpiece of literature, which received thousands of excellent reviews, makes little sense. So it is, and let me only very shortly to tell you what is a historical fiction which plot starts in 1815 in France and lasts for about 20 years. The main story of the novel is about ex-convict Jean Valjean and his attempts of expiation and redemption against all odds. It later evolves into a love story in the second generation after him, however, placing his personage always in the context.
Even if it was written in XIX century, the storytelling in the novel is excellent and is still superior to so many later „epoch works” ....
However, I want to stress some other aspects of this enormous (1900 pages) work. It contains a lot of deep philosophical passages about the nature of law, ethics, politics, religion and French history. Set in one of most tumultuous periods of the country history (like defeat of Napoleon at Waterloo or Spring of Nations), it examines the nature of historical and philosophical dispute between royalists and republicans. And in all these, philosophical, historical, sociological analyses, Hugo shows incredible level of maturity and, I could say, professionalism. He does not merely „philosophize" — he goes deeply into the nature of the problem, yet his language remains simple and direct:

„Conscience is the chaos of chimeras, of lusts, and of temptations; the furnace of dreams; the lair of ideas of which we are ashamed; it is the pandemonium of sophisms; it is the battlefield of the passions. Penetrate, at certain hours, past the livid face of a human being who is engaged in reflection, and look behind, gaze into that soul, gaze into that obscurity. There, beneath that external silence, battles of giants, like those recorded in Homer, are in progress; skirmishes of dragons and hydras and swarms of phantoms, as in Milton; visionary circles, as in Dante. What a solemn thing is this infinity which every man bears within him, and which he measures with despair against the caprices of his brain and the actions of his life! ”

And the last, but certainly not least matter: Hugo created the fictional world that still lives in us and in our culture. See around and you will quickly find Jean Valjeans, Fantines, Javerts, Cosettes, or little Gavroches. In operas, movies, theaters and songs... It is enough to remember this one ...
[the post finalized in Beavais, France in a cafe in front of monumental XIII century cathedral]
Posted by Mirek Sopek at 1:45 PM